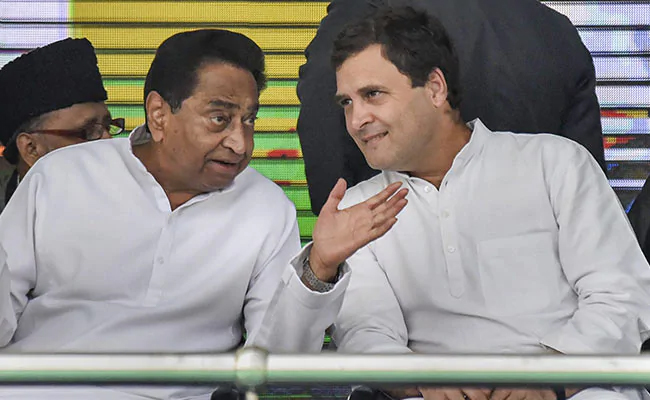 The Modi majority predicted by the exit polls seems to have been the tipping point for Amit Shah to launch a vigorous new "Operation Lotus" to dismantle (to borrow Rahul Gandhi's word of choice) the Congress governments in Madhya Pradesh and Karnataka.

While Shah flexes ahead, showing zero signs of fatigue after the lengthy national campaign, the Congress is busy shooting itself in the foot in the only state where it has a stable government, Punjab. There, the ugly infighting between Chief Minister Amarinder Singh and minister Navjot Singh Sidhu is a daily routine. Now, Singh, or the Captain, as he is known, perhaps the only regional heavyweight left in the Congress, wants Rahul Gandhi to discipline Sidhu and several of his loyal ministers have asked for Sidhu to resign for trash-talking the Captain in the home stretch of the election.

Meanwhile, Kamal Nath, the Chief Minister of Madhya Pradesh, which the Congress won in December, has publicly accused the BJP of offering upto 25 crores to his MLAs to switch sides and bring down the government. Tricky for him since he has just four MLAs more than what's needed to survive a trust vote (including the support of independents and Mayawati's party as well as that of Akhilesh Yadav). The existential threat has forced Kamal Nath to make a distress call to Mayawati.

In Karnataka, BS Yeddyurappa of the BJP has floated the theory that "20 Congress MLAs will join the BJP after the vote counting tomorrow". Yeddyurappa is the eternal claimant to the post of Karnataka Chief Minister. But it is true that the ruling alliance between HD Kumaraswamy and the Congress in the southern state has been in rehab for some time.

None of these crises for the Congress should surprise anyone familiar with the BJP's politics and its ability to crack open underlying opportunities. I had reported here earlier this month that senior BJP leaders had told me that they could topple the Karnataka and Madhya Pradesh governments easily but were waiting for the national election results to move in for the kill.

Anyone who tracks the Congress should be equally unsurprised that it appears totally unprepared for the BJP's ambush. In Karnataka, especially, the BJP has attempted so many versions of "Operation Lotus" that the Congress should know the drill by now. Panic buttons have been pressed and the familiar spectacle of MLAs being sequestered from temptation in strongman D.K. Shivakumar's resorts will resume. Rahul Gandhi has also summoned senior leader Ramesh Jarkiholi to Delhi today after reports that he met Yeddyurappa on Monday.